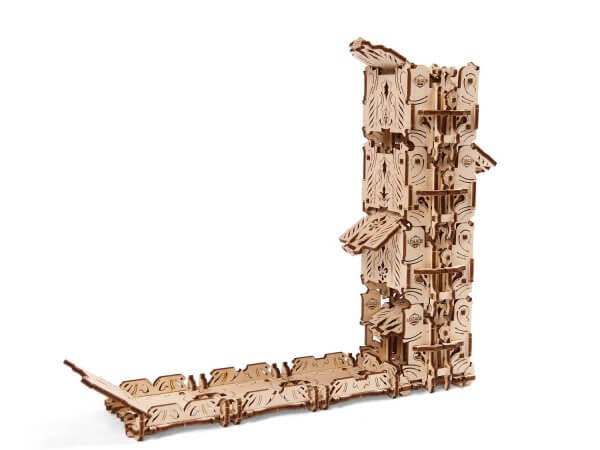 Find it for less? We Price Match!

The Modular Dice Tower is perfect for tabletop games fans who appreciate the beauty of clever mechanisms. This beautiful set is made of natural wood and is assembled without the use of glue. It could make a perfect gift, even for yourself, if you wish to combine your two favorite hobbies in one elegantly-designed and useful device.

The beauty of Modular Dice Tower is in its simplicity and its ability to offer a solution for multiple headaches that are all too familiar for everyone in the tabletop gaming community. First of all, forget about running after dice flying off the table from whenever you least expect it and finally focus on the game. Secondly, have some fun operating the tower, while its unique design adds a little extra excitement to your table.

Modular Dice Tower consists of 4 dice cups, one for each player. A player, whose turn it is, places their cup on top of the tower and presses buttons on the side to release the dice, while the tray in front of the tower doesn’t let the dice run away.

The set allows for multiple assembly variations, that include reorganizing the tower in order to serve in the game with more than four players, as well as, create two separate towers.

Made of high quality plywood; assembly requires no glue or cutting

Original models only
Have a Questions?
×